Ahead of ITMA 2019 in Barcelona this June, Texo AB, a member of TMAS, the Swedish textile machinery association, reports a surge in demand for its specialised weaving machines for the production of paper machine clothing (PMC).

“Rather surprisingly, given that China is now by far our biggest single market and the paper manufacturing industry has been gradually consolidating in Asia, we currently have new orders from both long-established North American and European customers,” says Texo President Anders Svensson. “The current global political tensions in combination with insourcing to Europe and North America have been important factors for these projects and I’m sure the evironmental benefit of significantly reducing transportation played a part too.” 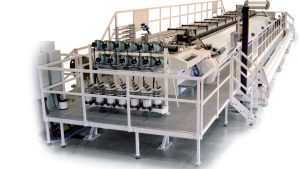 Despite the on-going Digital Age, it’s estimated that there are still approximately 7,000 paper machines operating worldwide, the most modern of which can run at approaching 2,000 metres a minute.

These machines are responsible for manufacturing over 400 million tons of paper each year, in thousands of separate grades of paper, paperboard and tissue.

All paper manufacturing machines require a regular supply of PMC, which as large continuous engineered fabrics, carry the paper stock through each stage of the paper production process. With technologically sophisticated designs, they employ fibres and other polymeric materials in complex structures and each paper machine has an average of ten separate fabrics installed on it.

Although the PMC business represents just a small proportion of the total cost of manufacturing paper, it can have a significant impact on the quality of the paper, the efficiency of a machine and machine production rates.

Yet due to many years of contraction and consolidation, only a handful of companies are now manufacturing PMC globally – and there are even fewer suppliers of the advanced technology for making them. 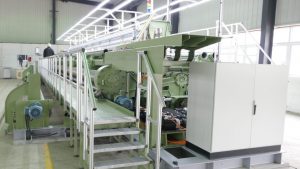 The TMR is an extra heavy duty high-speed hybrid loom developed specifically for the production of forming and dryer paper machine fabrics, as well as industrial fabric

“I find it quite staggering to consider that of all the paper that’s in the world today – and just think for a moment how much that actually is – around half of it has passed over fabrics manufactured on our machines,” says Svensson.

Principal products in the PMC segment include forming, pressing and dryer fabrics, all of which convert the initially wet mass of fibres through the paper machine as water is progressively squeezed out of it, ensuring it is held in place and air can be effectively blown through it at the dryer stage, to ensure a regular shape and extremely even surfaces.

PMC products can be up to 140 metres long and in the past have been made in extremely wide widths – the largest weaving loom manufactured by Texo had a working width of 31 metres.

Nowadays, however, due to advanced seaming technology, such extreme widths are not necessary. Nevertheless, Texo’s PMC weaving machines are still generally supplied today in working widths of between five and 20 metres.

The company’s TCR loom has been specifically developed for the production of very fine and tough forming fabrics where the highest quality is critical.

The FSX model is designed for the production of both forming fabrics based on medium-to-coarse yarns as well as press felt base fabrics, while the TMR is an extra heavy high-speed loom developed for both forming and dryer fabrics, as well as industrial fabrics such as filter materials employed in applications such as dewatering in the mining industry.

All of these looms are characterised by advanced features based on Texo’s over 60 years of know-how and constant development, including the company’s proven Pozi Grip rapier insertion system, Disco dobby unit, LoCoMo control system and TDD direct drive.

At ITMA 2019, however, Texo will be showcasing a section of one of its latest models with a more traditional cam drive, for which there is still market demand.

““We introduced the first weaving loom with an electronic drive for this industry over a decade ago and it’s been very successful, but there are still some companies who want to go the traditional way,” Svensson explains. “At ITMA we will be emphasising the fact that we have all alternatives available.”

TMAS companies will have a significant presence at the Barcelona show, where their emphasis will be on the latest automation concepts and the use of advanced sensor systems for enhanced and more resource-efficient manufacturing, according to TMAS Secretary General Therese Premler-Andersson.

“It’s ironic that while TMAS member companies are very much involved in accelerating Industry 4.0 concepts, their technologies continue to be crucial across many traditional industries such as paper making, where the use of technical textiles is perhaps not so widely appreciated,” she observes. “This is just one example of the huge and sometimes unexpected number of end-use markets served by our members as they have diversified from conventional textile technologies over many years.”

Download the pressrelease (word): “Half the world’s paper passes over fabrics made on our machines…”

FOOTNOTE TO EDITORS
Issued on behalf of TMAS by AWOL Media.